Not long after she embedded herself within Pompano Beach’s black community, photographer Johanne Rahaman was invited to a 115-year-old grandmother’s birthday party. There, at a rental hall in Pompano’s Old Town neighborhood, she witnessed a Haitian ritual that surprised her: Grandma Doris-Lee, whom the family affectionately called Gran Dor, was busy having five- and 20-dollar bills pinned to her dress by a granddaughter. The granddaughter leaned over and — snap! — Rahaman’s photograph caught the moment Gran Dor received a smooch on the cheek.

Snapshots of tenderness and warmth are common in Rahaman’s ongoing photo project “Black Florida,” in which she travels the state to capture the dignity of low-income and working-class African-Americans. For the past three years in Liberty City, Overtown, Fort Lauderdale and as far north as Palatka, outside St. Augustine, Rahaman has been photographing urban lives to challenge one-dimensional depictions of poor black communities on TV and in film. For her new Pompano Beach series, opening Thursday, Feb. 16, at the Bailey Contemporary Arts gallery, Rahaman presents 72 documentary-style portraits and landscapes shot between October and Feb. 5. 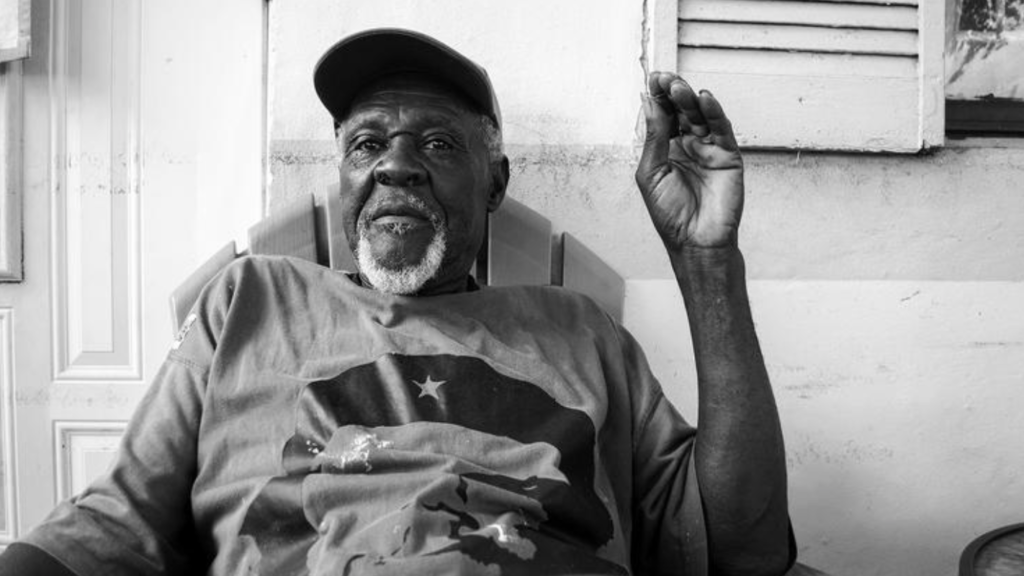 “Most of the films I’ve seen about Miami tend to focus on South Beach and glamorize it, but it’s not the entire story of Miami,” says Rahaman, of Miami and by day an office administrator for a Miami Beach real-estate firm. “The stories you find are so bittersweet, and full of love and full of the soft beauty of life that you’d never expect to see in a gritty neighborhood.”

Rahaman, who taught herself photography after immigrating to Miami from Trinidad and Tobago in 1996, says driving around Miami-Dade and Broward county’s African-American enclaves reminds her of home. Growing up in Trinidad’s Laventille ward, Rahaman says she didn’t realize her neighborhood was a slum until she became a teenager.

“I want to focus on people you wouldn’t normally hear from, whose stories are untold.”

So far, Rahaman has documented 16 Florida cities. Candid images from her Pompano Beach travels appear in color and black-and-white photographs in the gallery: a boy pausing between blows of his trumpet during a street parade; a shirtless man with dreadlocks laughing as a Swap Shop banner catches the afternoon sunlight in the background; a man picking through a vegetable patch; an elderly woman dressed in her Sunday best beaming at Rahaman’s camera as she exits a church; a 91-year-old woman, born and raised in Pompano Beach, suffering from the earliest stages of dementia; and a boy, learning to make breakfast for the first time, whipping egg yolks in a Tupperware container.

“I want to focus on people you wouldn’t normally hear from, whose stories are untold, but are just as important,” says Rahaman, whose series is partly financed by the Economic Hardship Reporting Project, a nonprofit supporting photojournalists reporting on poverty in America. (The Pompano images were funded by the city’s community redevelopment agency.)

More vital than these postcards of black life are the stories Rahaman learns by spending weeks with Pompano Beach families. The one lingering strongest in her memory is Sally Mobley, a grandmother who moved from Georgia to Pompano Beach as a child to pick beans. To save her younger sister from the same fate, Mobley dropped out of grade school and worked in the fields full-time, while her sister finished high school and college. Her grandson is Al Harris, a retired Seattle Seahawks cornerback, whose football photo she proudly displays in her living room.

“It takes awhile to get into a complete stranger’s living room, much less their bedroom,” Rahaman says, pointing to an image of Mobley rifling through clothing in her closet. “I prefer to work slow, organically, to take my time getting to know people.”

“In every portrait, you see hard-working people in their day-to-day, and that interaction helps us see their humanity instead of people who are forgotten or overlooked,” Benichou says.