We’re talking structures with architectural designs so grand that they make passers-by stop and stare. One garage has a helipad. Others have been used to hold wedding receptions and film TV commercials.

And there’s another one on the way: A planned 428-space parking garage at the base of the Las Olas Boulevard bridge in Fort Lauderdale will be decked out in LED lights that can mimic the crashing of waves on the beach or fireworks. The five-level, $21 million garage will even have a rooftop restaurant and space to host events.

As this urban trend continues to grow, here is a look at some of the more standout parking garages in South Florida.

Everybody knows this as the jewel of parking garages in South Beach. With protruding angular columns, this open-air garage towers over Lincoln Road Mall’s western end and provides panoramic views of the 33139.

Designed by Switzerland-based Herzog & de Meuron for developer Robert Wennett, the garage opened in 2010 with 300 spaces. The seven-level garage has an event deck that has been used for photo shoots, receptions and movie opening events. Level 5 has a glass-encased fashion boutique called Alchemist. 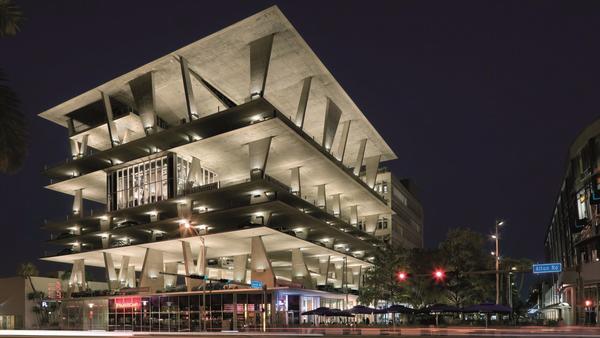 With its LED-lit aluminum sails that wrap around the exterior, this garage in Pompano Beach is hard to miss.

The $19.9 million structure has a colorful three-story fish mural and a glass elevator with views of the ocean. The city’s first public garage, on Northeast Second Street between State Road A1A and Pompano Beach Boulevard, has 663 spaces. The garage was designed by Currie Sowards Aguila.

Pompano Beach officials billed it as an “iconic structure for the city” and celebrated the opening in June 2016 with a band, food trucks and fireworks.

Designed by architect Donald Singer in 1978, this garage at 150 SE Second St. is known for its exposed concrete, each level flanked by red railings.

Part of the ground floor is home to City Park Mall, which includes a bistro, dentist office and a city office. A walkway on the second floor connects to the Broward County Main Library. In all, there are seven levels.

In a letter to the Sun Sentinel in 2012, Singer wrote, “The structure was designed to be transparent, never revealing its true size, inviting, linking the street to parking, the auto to pedestrian and connecting one area of Downtown to another while becoming an integral and kinetic part of the urban fabric.”

And if you suddenly hear thunderous mechanical sounds and feel gusts of wind, it’s most likely a helicopter landing or taking off from the garage’s helipad.

It’s officially called the Ballet Valet Parking Garage, but it’s better known by its nickname, the “Chia Pet” garage. That’s for the rows of shrubbery that line each level of the exterior of the garage, at 634 Collins Ave. The different shades of green make it look like waves from the nearby ocean, according to the building’s architect, Miami-based Arquitectonica.

The six-level garage, which opened in 1996 with 650 spaces, sits across the street from Cuban restaurant Puerto Sagua.

The structure also has a pop culture connection: DASH, the clothing store owned by reality TV’s Kardashians, sits below the garage, and fans are often seeing taking selfies there.

Wrapped in metal mesh, this six-level, 535-space garage at 1661 Pennsylvania Ave. is known as the New World Symphony garage because of its proximity to the symphony’s performance venue.

The exterior has LED lighting that illuminates its stretch of 17th Street with dramatic hues.

Commuters along Interstate 195 by the Miami Design District may easily mistake this garage for an artsy billboard.

In the middle of the garage’s exterior, there’s a grand mural of people at the beach. Andeach end of the structure, at 3800 NE First Ave., has a metal screen pocked with gold- and silver-hued perforated patterns and modules.

But it’s not just for cars. Rows of sleek-looking bike racks are available on the ground floor.

The garage has seven levels. On the ground floor, there are businesses including Orangetheory Fitness and Ahana Yoga. The top floor provides great views of downtown Miami to the south and Miami Beach to the east. The elevator doors are transparent, so you see each floor as you glide up or down.

The new, nine-level parking garage at the Palm Beach County Convention Center, 650 Okeechobee Blvd., will have 2,643 spaces and is designed with panels in peach, brown, and white colors.

The garage, which cost about $35 million, is expected to open in a few weeks, according to Dave Anderson, general manager of the convention center.

The structure was designed by architect Leo A. Daly and constructed by The Weitz Co.

“We tried to soften the look so it’s not your typical garage,’’ Anderson said. “We put a skin over the front to make it look more appealing.”