So much thought has been given to the idea that social media is degrading society, but if we take social media for what it is, the opportunity for people to share their experiences, and in doing so, inform their friends and family about their life; the potential for ‘good’ is excellent! The world community is shifting their priorities, insisting on “green” products, non-GMO food, and socially responsible brands and using social media to express their preferences. The question is, how can cities use social networks to expand real-world initiatives that create impactful and sustainable community improvements?

Here are two communities working to protect the environment and examples of how they have used social media to get community involvement and make a positive impact:

Like most modern cities, Los Angeles is covered in dark asphalt, which absorbs up to 95% of the sun’s heat causing not only the streets to heat up but also the surrounding areas. This issue is known as “urban heat island effect” and can cause the average air temperature in the city to rise 22 degrees further.

To combat this, Los Angeles is painting its streets with a grayish white coating called CoolSeal.

When painting the streets with CoolSeal, less heat is absorbed into the roads and emitted into the air (areas with CoolSeal are 10 to 15 degrees cooler) causing a positive domino effect where less energy is used in the surrounding neighborhoods. The reason is simple: if the outside air is cooler, residents will use less energy from air conditioning, saving themselves money while also saving the environment. Pretty cool, huh?

How They Used Social Media to Increase their Impact: By Creating a Video

This initiative has been in the works for almost a year; however, it keeps getting new boosts as different social networks and influencers pick up on the story. One of the original coverages of this was in a YouTube video from September 2017, check it out here.

The video was made to not only be visually appealing, but to also tell a story through words over video, allowing people to both watch and/or listen to it.

Action: If your city is doing something that is shareable, create a video; it doesn’t have to be fancy, but it should be both visually engaging and informative.

Many people are becoming aware of how harmful single-use plastic straws are to the environment; they are yet another overused plastic polluting our oceans and in turn hurting our wildlife. However, in many places there are not a lot of options for recycling them, nor enough information available to consumers. Businesses are also misinformed about alternative, eco-friendly options; e.g. many businesses think that paper straws are too expensive, in reality they are only $0.01 more than plastic.

The lack of options regarding recycling plastic straws is particularly true for the state of Florida, where there is not one (not even ONE!) facility that recycles single-use plastic straws. The environmental impact for this is dire, and Jupiter, Florida saw an opportunity to raise awareness on this issue to prevent further damage before it’s too late with their Ban the Straw initiative. Their website offers so much important information on this problem and answers a lot of misconceptions to help people change how they buy, use and dispose of straws. Read more about it on their website.

How They Used Social Media to Increase Their Impact: By Creating Shareable Collateral

This is a graphic created by the Ban the Straw initiative to spread their message, it’s bold and impactful, and most importantly gets the point across in a simple and shareable graphic. 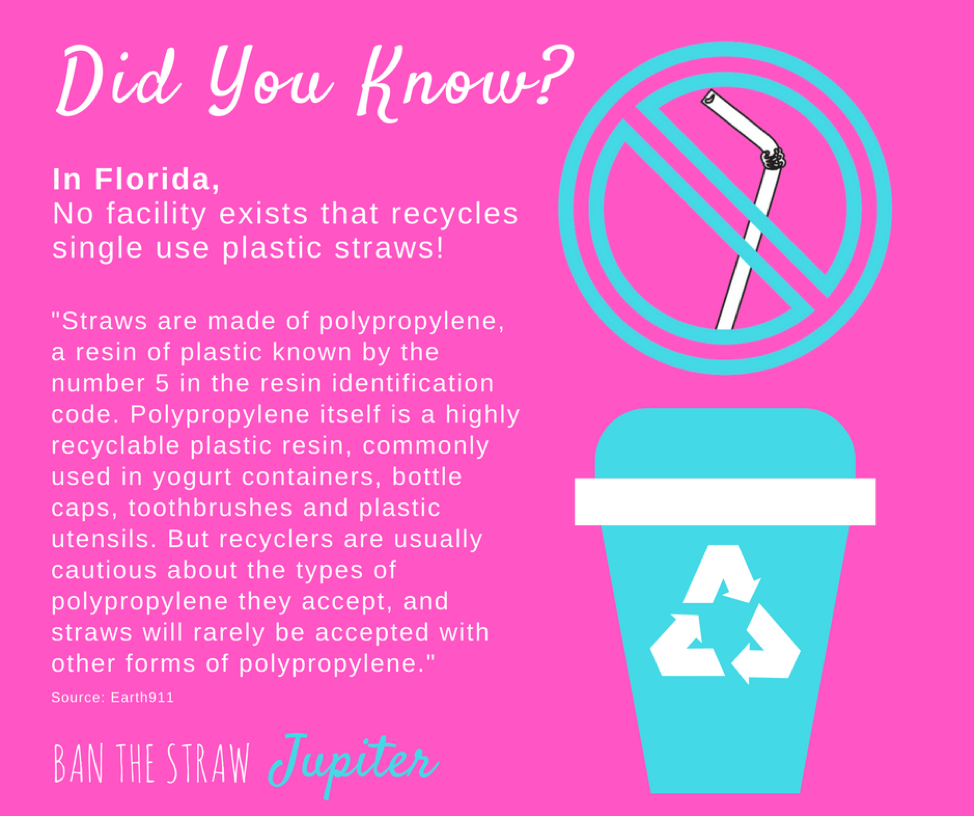 Action: Create shareable social media posts, create snapchat filters, and create easy to copy and paste links that make it simple for your community to show their support. Everyone wants a great image/graphic of what they support, but few people take the time to create it, so set the stage to initiate real change.

Use Social Media to Increase Your Impact: Don’t Just Create an Event, Make Your Event Count

Many communities understand that events help raise awareness on pressing environmental/sustainability issues; there are events held on green holidays like Earth Day, sponsored walks put on by charitable organizations, beach clean-ups and more. Making your initiative event-worthy is great, but even better is to extend the duration beyond the event. If you are having an event to celebrate something, don’t just make it one day. Make it every day for a month, with the final Facebook event happening on the last day of your event listing. Creating a recurring event not only provides ongoing coverage, it also provides the opportunity to consistently engage with your interested audience and challenge them to participate in something new each day.

Another option is to create a social media challenge or competition using a custom hashtag, like this one put on by UN Environment for their #CleanSeasPhoto challenge.

Engage the community by having them share photos related to your cause using the custom hashtag so they can compete to either be showcased at the main event or, in the case of #CleanSeasPhoto, win a prize at the end of the challenge.

People love to share what they are passionate about; this is an excellent opportunity to utilize social media to build relationships with your community while working toward a common goal – saving the planet.