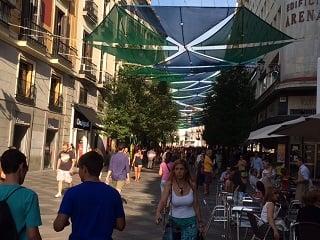 As urban downtowns such as Delray Beach, Florida gain in popularity, city officials tend to panic over parking and traffic and often times turn to traffic engineers to alleviate the problem. This can be a costly mistake. Instead of looking for ways to accommodate the increase in vehicle traffic, they should embrace the pedestrians.

More pedestrian traffic for restaurants and shops leads to more revenue. “Successful city redevelopment is characterized by very strong retailing, particularly in the restaurant, women’s apparel, beauty and fitness categories,” said Chris Brown, RMA Principal. “This surge of growth along with new urban housing, whose patronage consists of younger generations including the ‘creative class,’ will lead to increased traffic – both vehicular and pedestrian.”

How a city handles this influx is critical.

Cities like Delray Beach, who do not have a parking management system, find themselves facing traffic issues that are exacerbated by additional drivers in search of parking and a lack of directional signage. Often times, city officials will go into panic mode and call in the traffic engineers, who I refer to as street surgeons. These engineers may propose shutting down left turns, removing street parking to widen traffic lanes and other incendiary ideas.  My recommendation is to never talk to a traffic engineer when you perceive your city has too much traffic – instead learn from the Europeans.

Over the years European cities have learned a valuable lesson the hard way after narrowing sidewalks, adding more traffic lanes and making intersection improvements in order to accommodate increased vehicle traffic, all of which failed to address the issue in the inner urban city.  What they didn’t take into account was the pedestrian traffic, the citizens and visitors that also filled the city. Fortunately many of these European cities, including Nice, Barcelona and Madrid, changed course and spent the last twenty five years tearing up their central plazas in order to build three or four levels of parking below ground. This took care of much of the parking issue and they finally began to embrace the pedestrian.

How?  They began to close streets to vehicles (except for the early hours of the morning for deliveries and during the day for slow driving taxis).  In Madrid for example, where I was a student, they worked for years to solve the traffic problem around the main street. Finally, in 2014 they closed Calle Mayor (mainstreet) to traffic and it is now an incredible pedestrian street.

And what happened to the retailers? They are ecstatic.  Sales are up a whopping 50%.  So a word to Delray Beach and other cities facing this issue: embrace the pedestrian, build perimeter parking,  close Atlantic Avenue to traffic and let it become Delray Beach’s own Calle Mayor!